Come see our “Candyland” tree and bring a friend and a bottle of wine to share if you wish.

Mulled Cider (hot or cold depending on weather)

The cost is $20 per person and advanced payment is required.

Cutoff date for registration and payment will be December 8th.

On June 25, 2019 at the Historic School House in downtown Windermere, FL, our club had a small dedication of the bench for recently passed and former club president Marjorie Masson. Funds for the bench was provided by her friends and family as well as individual donations from current club members. Thank you everyone.

Photos were provided by Maureen Tuber and Debra Neill. Thank you ladies. 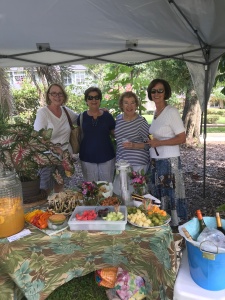 Unveiling of the bench by Outgoing President Bonnie B. in white and President Vicki H. 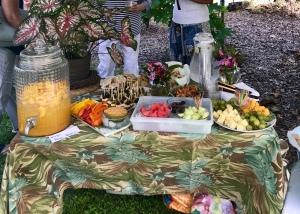 On Nov. 15th-16th, we hosted a free horticulture specialty flower show at Windermere Town Hall to celebrate our club’s 60th year as a Florida Federation of Garden Clubs federated club. The show was a contest of potted plants, orchids, and cuttings from yards with three special photography categories for Windermere Garden Club members only.

It was all hands on deck to make this show a success. Thank you to all of the members who helped with and entered the show.

Special thanks to our two flower show chairmen Joan P. and Jackie H. Also, a special thanks to Schedule Chairman Maureen T. and Horticulture Entries’ Chairman Darlene L. Thank you to Bonnie B. and Tanya C. for hosting the judges’ breakfast. Thank you to Recording Sec. Janet S. and her husband, Philip, who hosted the judges’ lunch at their home featuring Philip’s homemade pumpkin ravioli.

Light breakfast for the flower show judges provided by President Bonnie B. and other members of the garden club. Set up by Bonnie B. and Tanya C.

President Bonnie B. with table arrangements that matched the flower show’s  program/schedule which she created for the judges’ coffee. Great job.

Special table at the show with several of our scrapbooks from our club’s historian, Margaret S. Thank you Margaret for all of your work.

Thank you to everyone who entered the show and congratulation to all of the contestants that were winners.  Congratulation to President Bonnie B. who won the “people’s choice” award which was voted as the best entry at the show by the public with her donkey ear plant, Kalanchoe gastonis-bonnieri.

The following are photos of the horticultural show: 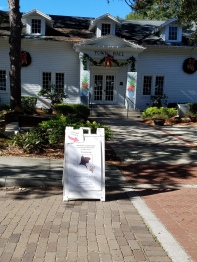 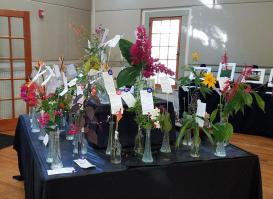 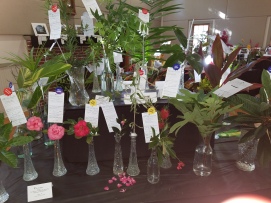 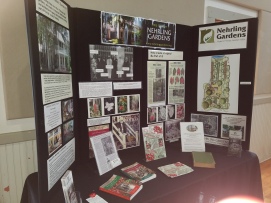 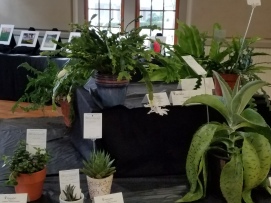 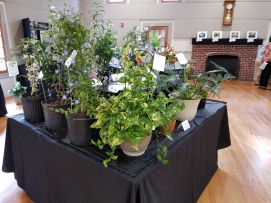 On Thursday, May 4th at the Dist. VII Spring Meeting, Windermere GC member Vicki Hearst was recognized as our club’s nominee for the “Inspired Gardener” for Dist. VII.  The Inspired Gardener award is for garden club members who are very active in gardening but who are not officers or chairman at the state or national level.

Vicki was not selected as the district’s “Inspired Gardener” but we are still very proud of her. Her work at the butterfly garden at Windermere Elementary School and designing the new landscaping at the 1887 Windermere Historical Schoolhouse, Crazy Card Party Fundraiser Decoration Chairman,  and many other club projects throughout the years has made her quite an asset. She not only was an asset for our club but to her church, friends, and family for floral arrangements she has created and landscaping advice she has given. 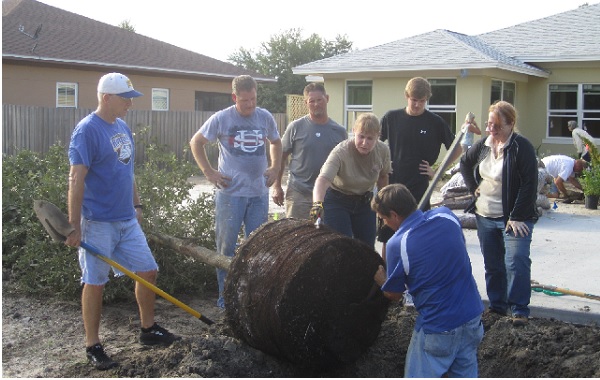 Dist. VII’s  Habitat for Humanity (H for H) Chairman Theresa Schretzmann-Myers of Windermere GC in the center of the photo made possible  with Dist. VII’s H for H funds the purchase and planting of two large live oak and other plantings at the new home of Cpl. “CJ” Barnes in Oakland which is part of H for H’s Home at Last project for  combat wounded soldiers.  Other WGC members who volunteered that day were:  Jacqueline Rapport, Maureen Tuber and Tanya Chesire.