On November 8th, we had a general meeting at Windermere Town Hall. The informal coffee before the meeting was hosted by Tanya C.

Hostess Tanya C. with a central piece made of dyed wood shavings.

Thanks to Tanya C. for bringing the snacks, juice and decorations for the informal coffee.  Thanks to co-hostess Peggy C. who provided key ingredients for the snacks to Tanya when Peggy was not able to attend or prepare food for the meeting due to an injury a few days before the meeting. Thanks to our Hostess Chairman Carolyn B. for her help with set up and clean up. 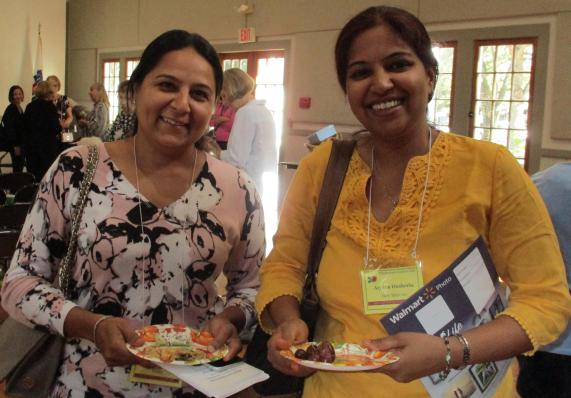 Unfortunately, our original program had to be changed at the last minute. Our replacement program was a speaker from Walt Disney World Debbie Mola Mickler who spoke on trees at Disney World. Thank you to our Horticulture Chairman Barbara B. and 2nd VP/Program Chairman Mary Black for the quick change.

Our speaker described how the horticulture team at Disney World would use plant material and move very large trees to create a scene. It was interesting to hear that to make an quick jungle, they would grow vines on dead trees that they had moved in. Also, how they moved a huge live southern oak to Magic Kingdom’s Liberty Square to represent the “Liberty Tree” and the tree became the logo for Disney’s Horticulture Team.  The original tree “Liberty Tree” was an elm in Boston Commons and under its’ branches in 1765 colonists staged the first act of defiance against the British government.

On the left 2nd VP Mary B. and on right is our speaker Debbie Mola Mickler

View all posts by WGC ADMIN